Special Pricing for Local Pick Up Only, click here to learn more
Due to global pandemic and a shortage of raw materials for manufacturers, stock will fluctuate. Please contact us via phone, message, or use our quote request system for a stock check. Click here to contact us
APEXi AVC-R, Boost Controller, (Black)
Skip to the end of the images gallery 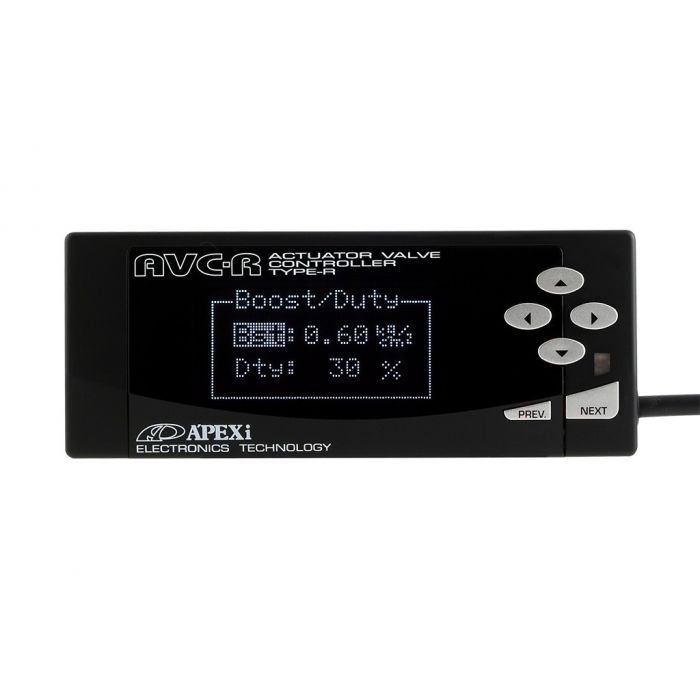 Skip to the beginning of the images gallery
Details
The AVCR is a digital boost controller that allows the user to modify the boost pressure level on turbocharged vehicles. While there are many boost controllers on the market, none of the other includes as many features as the AVCR, period. Despite all of the complex features included the unit, the AVCR is flexible enough to be used by beginners. Entry level users need only to input a desired boost level and the AVCR's trademark self learning CPU processor does the rest.

The AVCR also uses a highly durable, fast action solenoid valve to physically control the boost . The valve movement (Boost Duty Cycle) can also be modified. Raising the duty cycle increases boost response, while lowering the duty cycle will slow boost response. This feature allows boost response adjustment for varying turbo sizes. Since larger turbos take longer to spool up ( bad low end response) the duty cycle should be raised under lower RPM's for better response. The opposite should be done for smaller trubo's ( excellent low - mid range response, but limited top end power.) Apex engineers address this issue by including extra menus for RPM based boost control. Drag racers may want to utilize the Gear based boost control function. Aside from the basic functions above, the AVCR has a Start Duty Setting ( allows the boost to momentarily overshoot according to gear).

The AVCR also includes a Scramble Boost function which allows the user to momentarily raise or lower the boost level at the push of a button. Raising the boost level is commonly used when an extra burst of power is needed (ex. entering a freeway). This feature can also be used in drag racing. The driver can set the main boost level to a low setting for maximum traction then, once full traction is achieved, the scramble boost can allow the vehicle to boost full power.